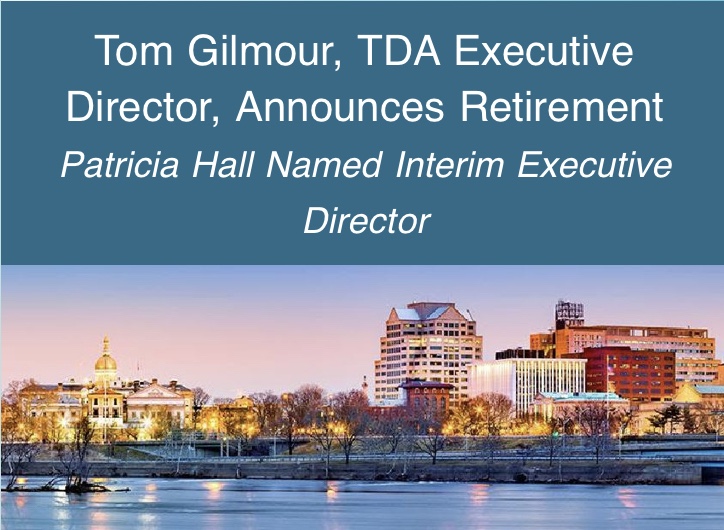 Tom Gilmour, Executive Director of Trenton Downtown Association (TDA), has announced his retirement, effective January 31, 2021. Patricia Hall has been appointed TDA’s Interim Executive Director by its Board of Directors.For the past four years, Mr. Gilmour has led the organization’s expansion and played an instrumental role in promoting the city of Trenton as a great place to work, live and visit.

During his tenure, TDA created a desirable environment to attract developers and new businesses to the capital city. Under his leadership, the organization expanded their innovative arts programming and provided much-needed funding to local businesses during the coronavirus pandemic. Mr. Gilmour also served as the Chair of the Princeton-Mercer Convention & Visitors Bureau and was a member of Greater Trenton’s Advisory Committee.

“I am fortunate to have had the opportunity to work with some amazing professionals in Trenton and am very proud of the work the TDA staff accomplished during my tenure,” says Mr. Gilmour. “While I am sad to be leaving, I am also confident the organization is poised to move ahead with many new initiatives.”

Patricia Hall brings extensive nonprofit leadership experience to her position as Interim Executive Director. She most recently served as Director of Operations at the Trenton Free Public Library, where she worked for 33 years. During that time, she restored the library as a vital city entity offering more than 30 programs. A graduate of Villa Victoria Academy and Argosy University, Ms. Hall has served on several boards, including TDA’s, and has been active in the community for many years.

“I am determined to lead TDA during this transition, assuring that the organization remains true to its mission to strengthen downtown Trenton by promoting and supporting its businesses and residents,” adds Ms. Hall.