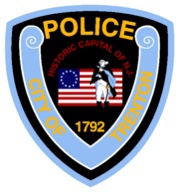 Trenton, N.J. – Trenton Police Director Sheilah A. Coley today announced that a Trenton man had been arrested for multiple drug offenses on Mar. 17, 2021 after a two-week operation seized 50 bricks of heroin and more than $1,000 in suspected drug proceeds.

The arrest was carried out following complaints of narcotic activity at 125 N. Hermitage Ave, which led to a two-week surveillance investigation of the location by the Violent Crimes Rapid Response Unit.

After executing a search warrant on March 17, 2021, members of the Street Crimes Unit entered the property and apprehended Jackson without incident.

During a search of the premises, officers confiscated 50 bricks of heroin and $1,343 in suspected drug proceeds.

“While our community seeks to overcome the COVID-19 pandemic, we cannot lose ground to the other disease that has claimed far too many lives for years,” said Director Coley. “The opioid crisis is still very real, and I thank the residents who report these crimes and the TPD officers who are out there every day ridding the streets of dangerous narcotics before they harm more Trentonians.”

These charges and allegations are merely accusations, and the defendant is presumed innocent unless and until proven guilty. This is an ongoing investigation.