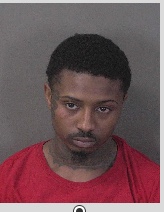 TRENTON, N.J. (PBN) City Violent Crimes Unit Detectives conducted surveillance in the area of Boudinot Street when they observed Papino Lloyd 22 of Trenton in possession of a handgun. They attempted to stop him and he fled, discarding a handgun in the process. He was eventually apprehended and found to be in possession of a Polymer handgun with a high capacity magazine [no serial number] and a distributable amount of CDS Crack-Cocaine. This incident occurred within 1000’ of a school and 500’ of a park. He was later found to be a Certain Person not to possess a handgun/ammunition.

#1:  Unlawful Possession of a Handgun

#4:  Certain Persons not to Possess a Handgun

#5:  Certain Persons not to Possess Ammunition

#6:  Possession of a Handgun during a CDS Offense

#11:  Obstructing the Administration of Law